Liverpool is a Football Club with a deep history and a huge global fan base of over 700-million fans. The 19/20 Football season started like a dream for LFC, they came out of the blocks firing and by February 2020 Liverpool were top of the League and 25-points ahead of those in 2nd place. Liverpool were on track to win the English Premier League. Something they hadn’t done in 30-years!!

Fans were excited and they’d already started dreaming of victory parades, trophy lifts and celebrations to salute being Champions. Then on March 13, 2020 the English Premier League announced the suspension of all games in response to COVID-19.
The suspension would last 100-days.

The brief
As football resumed and Liverpool FC continued their path to winning the 19/20 season it became clear that the end of season celebration would happen under the constraints of COVID-19. In any other year, Liverpool FC would have lifted the Premier League trophy at their final home game in front of thousands of Liverpool FC fans with a street parade of millions.

Fans have waited forever, well 30-years, to be a part of this historic Premier League win but due to COVID-19 they would be locked out.
Standard Chartered asked how could they get fans closer to their heroes, how could we help them celebrate, to be in the famed Anfield stadium and show their LFC pride.

As Liverpool FC raised the Premier League Trophy for the world to see… we launched cannons full of fan confetti each printed with a different message from fans across the world. Fan’s pride illumined the night sky, it was captured by every media outlet and it put millions of fans, virtually, in the same place as their winning team! The fans who tweeted #StandRed messages had their tweet printed on sustainable confetti and we launched them 15-meters high to rain down on the Liverpool FC Players as the world watched. The fans tweets were collated from more than 60 countries to truly give access to all and have heartfelt messages of congratulations reach the Liverpool FC players.

We set out to give fans a moment to celebrate together and we gave them a place in LFC history. Millions of fans were featured in the Tweet Victory photo with the players and the trophy in celebration of this  epic and historical win.
Putting fans at the heart of celebration, now that’s Tweet Victory.
It’s better together with Standard Chartered.

The Results
The Tweet Victory campaign provided a platform for thousands of fans to be a part of the Trophy Celebrations at Anfield. We launched 72kgs of sustainable confetti, sharing the fan’s true words of celebration with the players.
The 2 social posts saw positive engagement from over 141,000 Liverpool FC fans.
This fan interaction was a ginormous increase of 632% compared to Standard Chartered LFC posts.

This simple campaign garnered over 8-millions views on Standard Chartered and Liverpool FC social channels, with less than USD55k media spend. We earned media reactions from Press in attendance and enjoyed the sweet celebrations for days.

"Twitter was the perfect platform for this unique engagement with Liverpool FC fans during lockdown. Through the channel we gathered messages of support and celebration from around the world, which rained down on the players as they lifted the Premier League Trophy in an empty Anfield stadium."
Emma Sheller (@EmmaSheller),
Global Head Brand & Marketing, Standard Chartered Bank
Twitter Case Study and Data

The Tweet Victory campaign scored 1.38M total engagements with a 7.15% engagement rate, over performing the benchmark of 4.4% across targeted markets.2 During the two-week campaign period, there were over 14K Tweets using the #StandRed hashtag. Cost per engagement was 50% lower than benchmark,3 and the conversations were 97% positive/neutral4 sentiment — a 55% improvement on positive sentiment and 71% less negative sentiment from the previous period.5 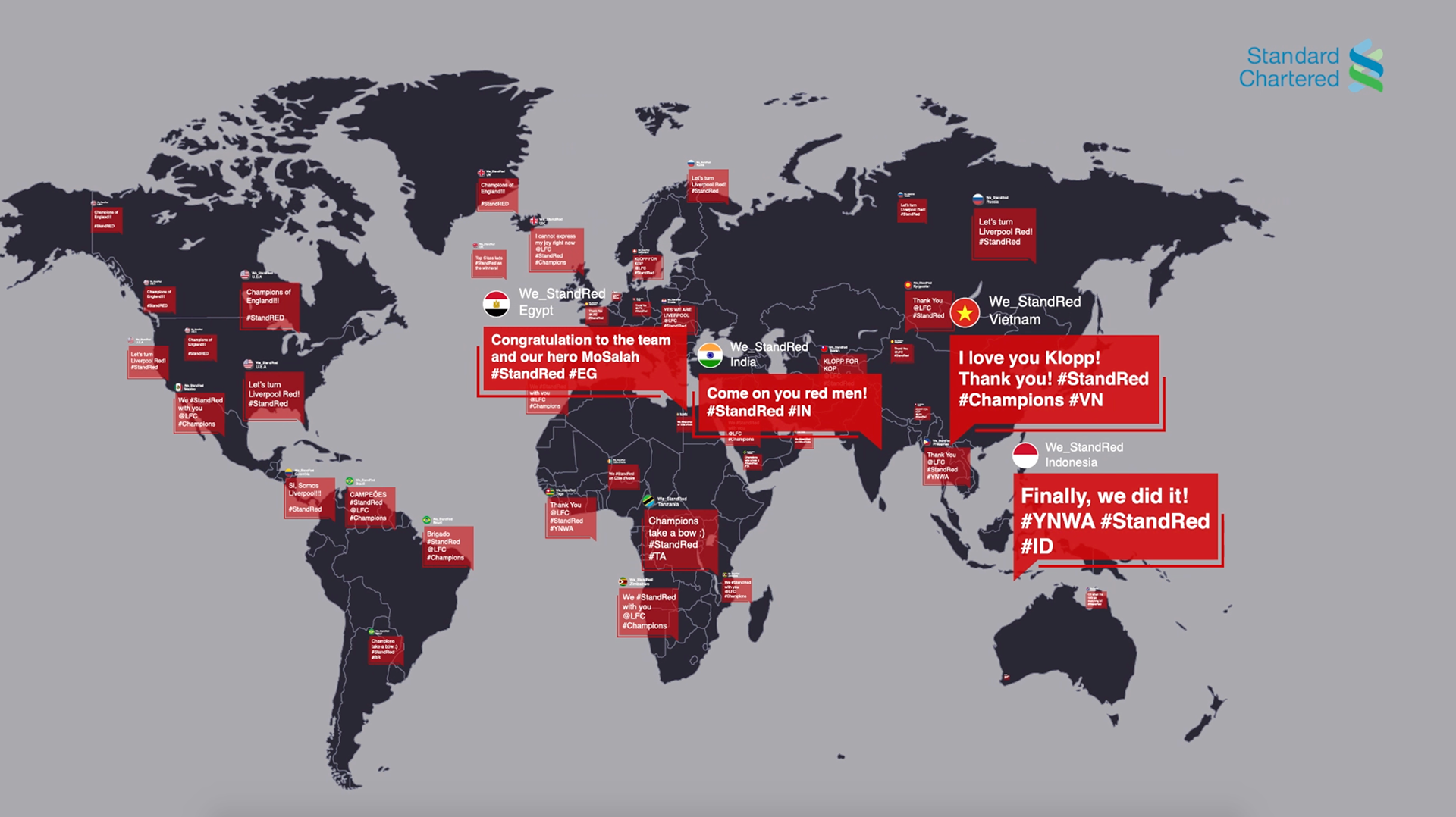 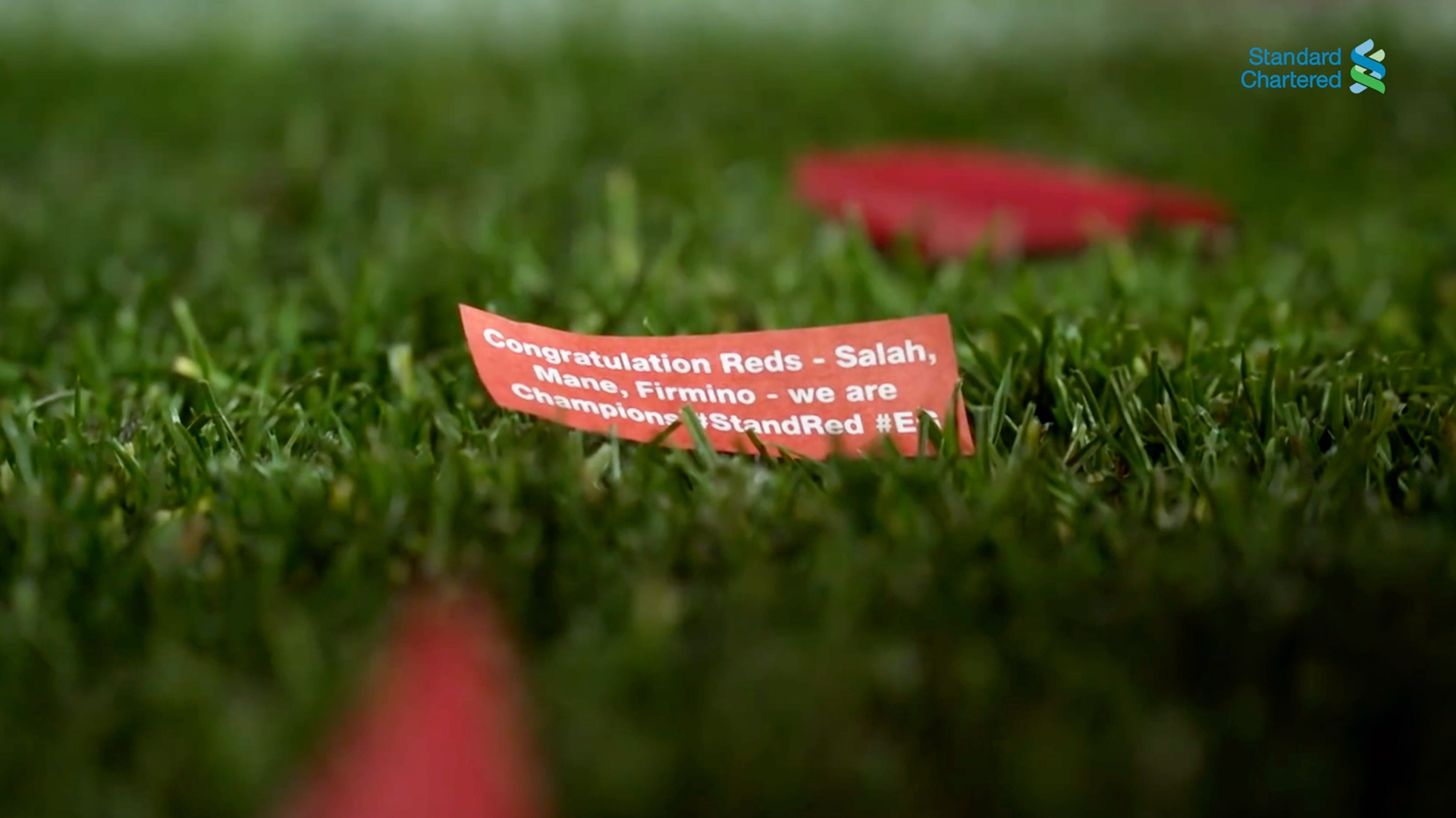 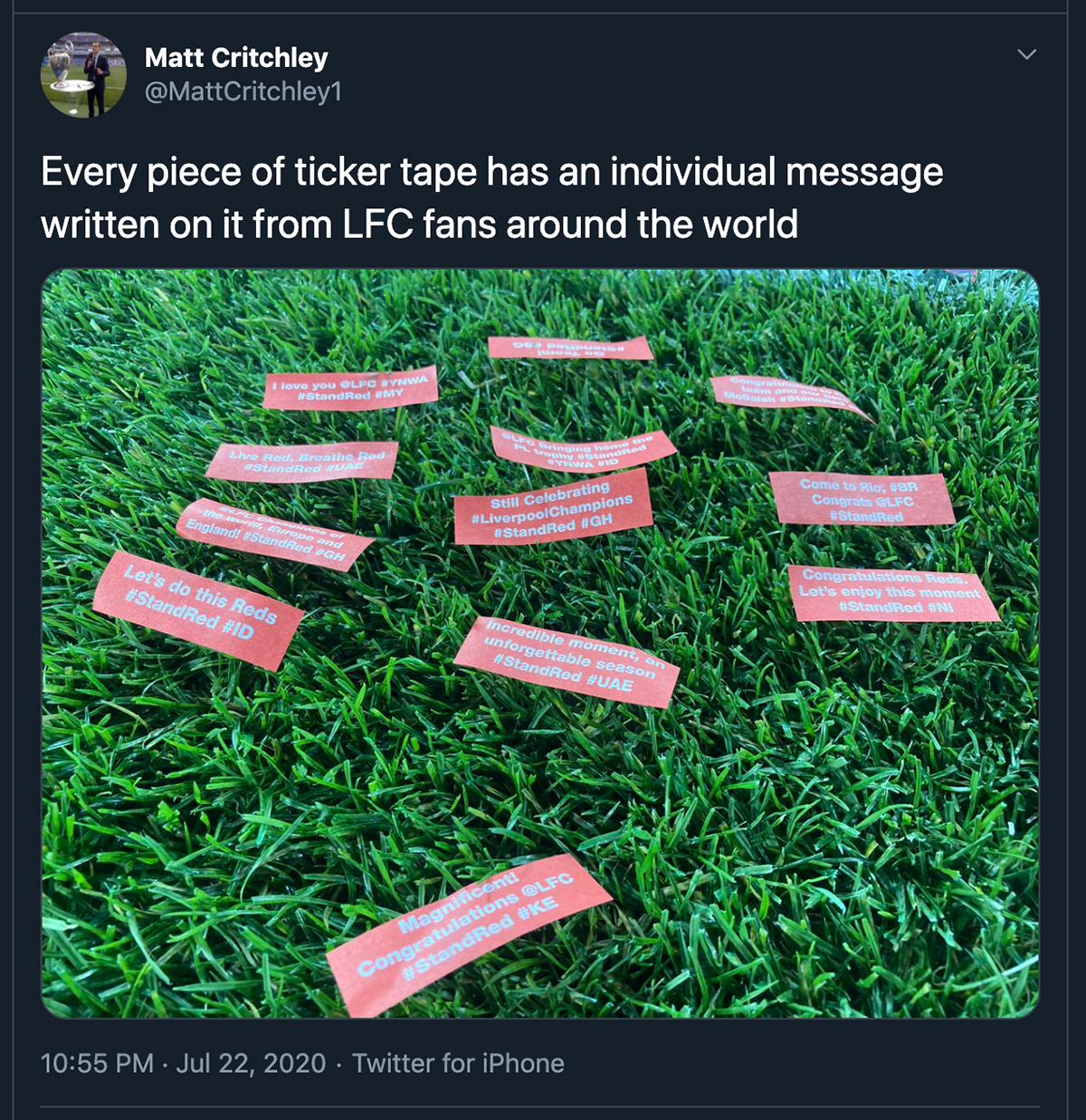 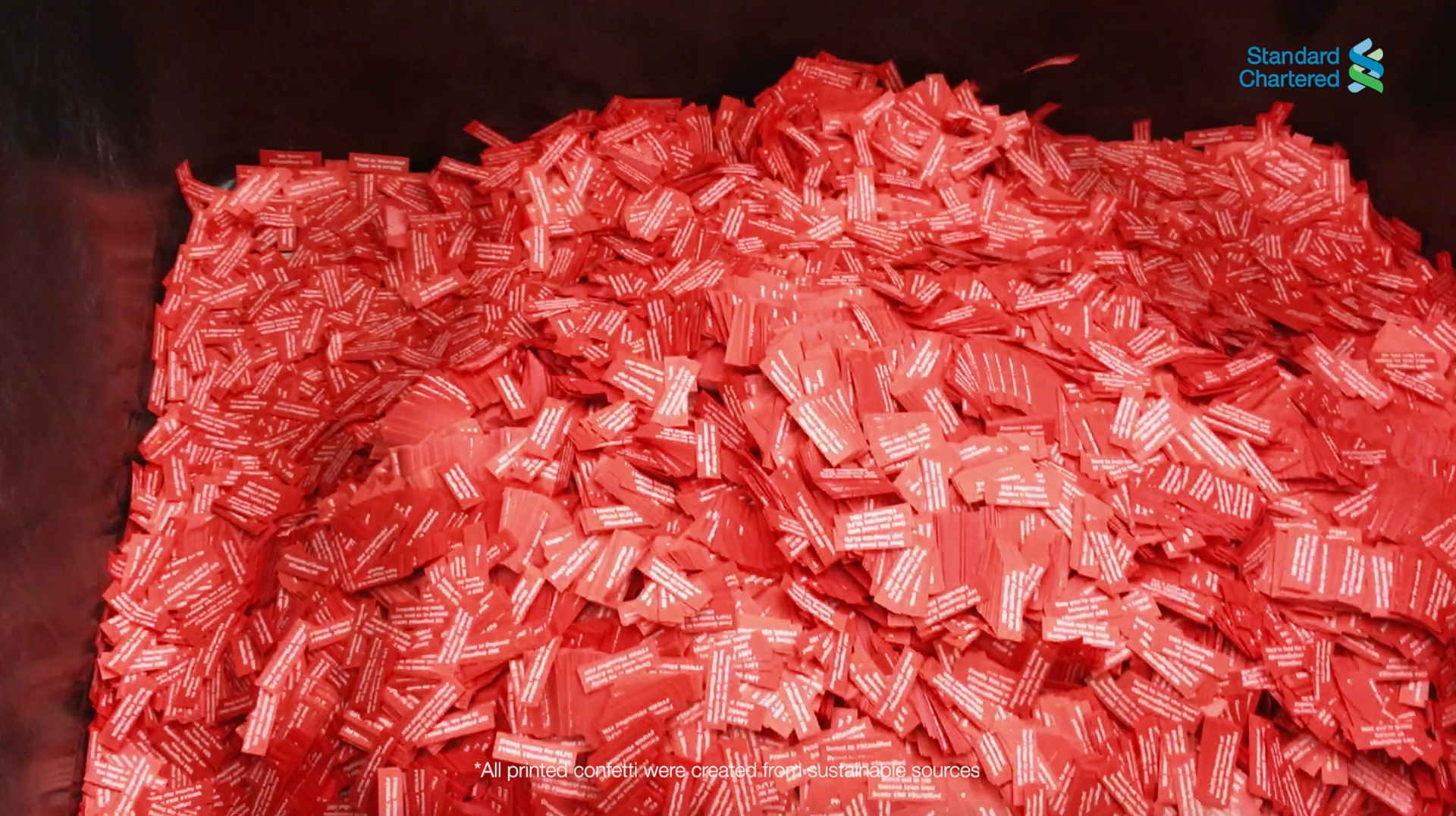 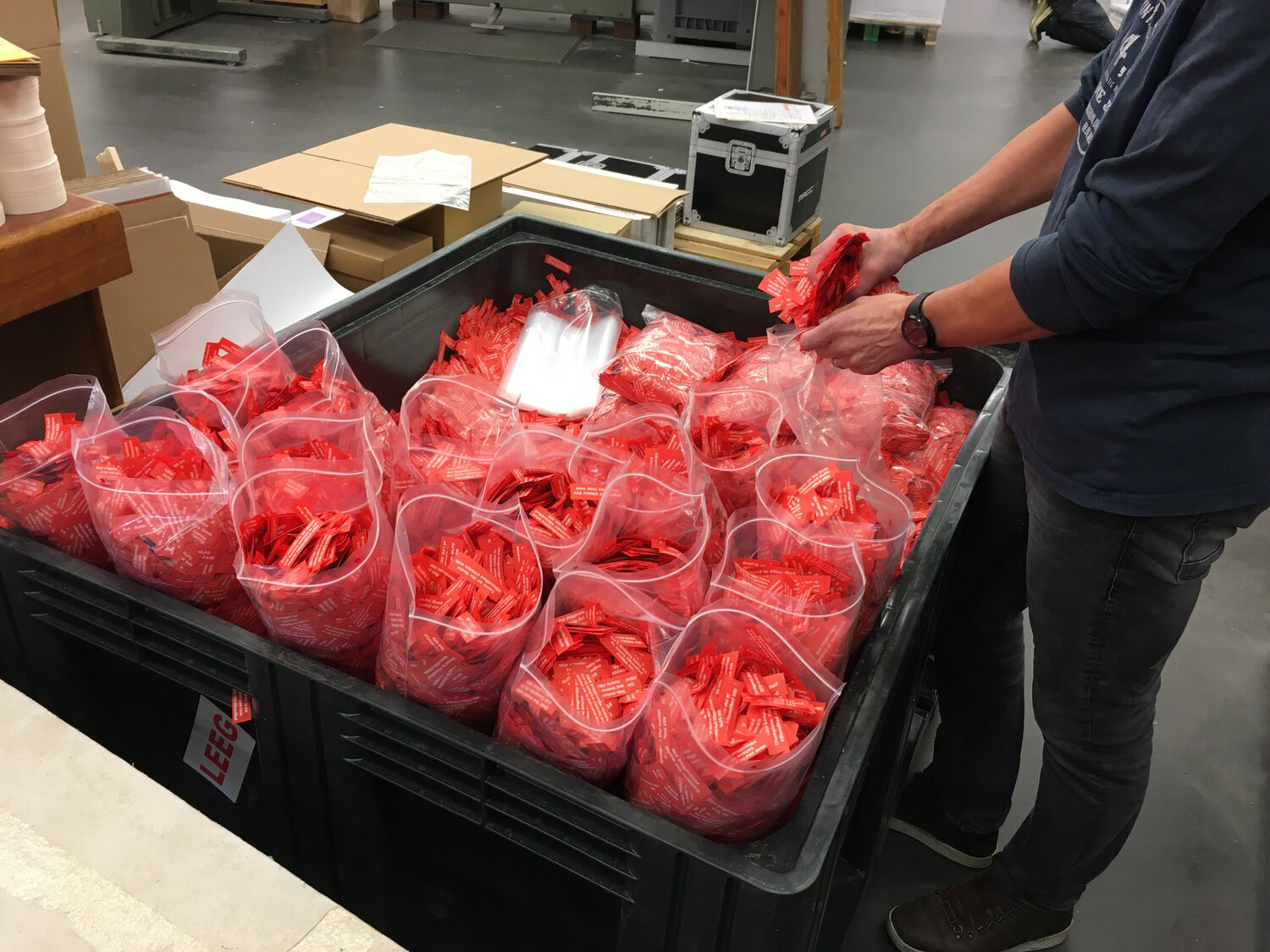 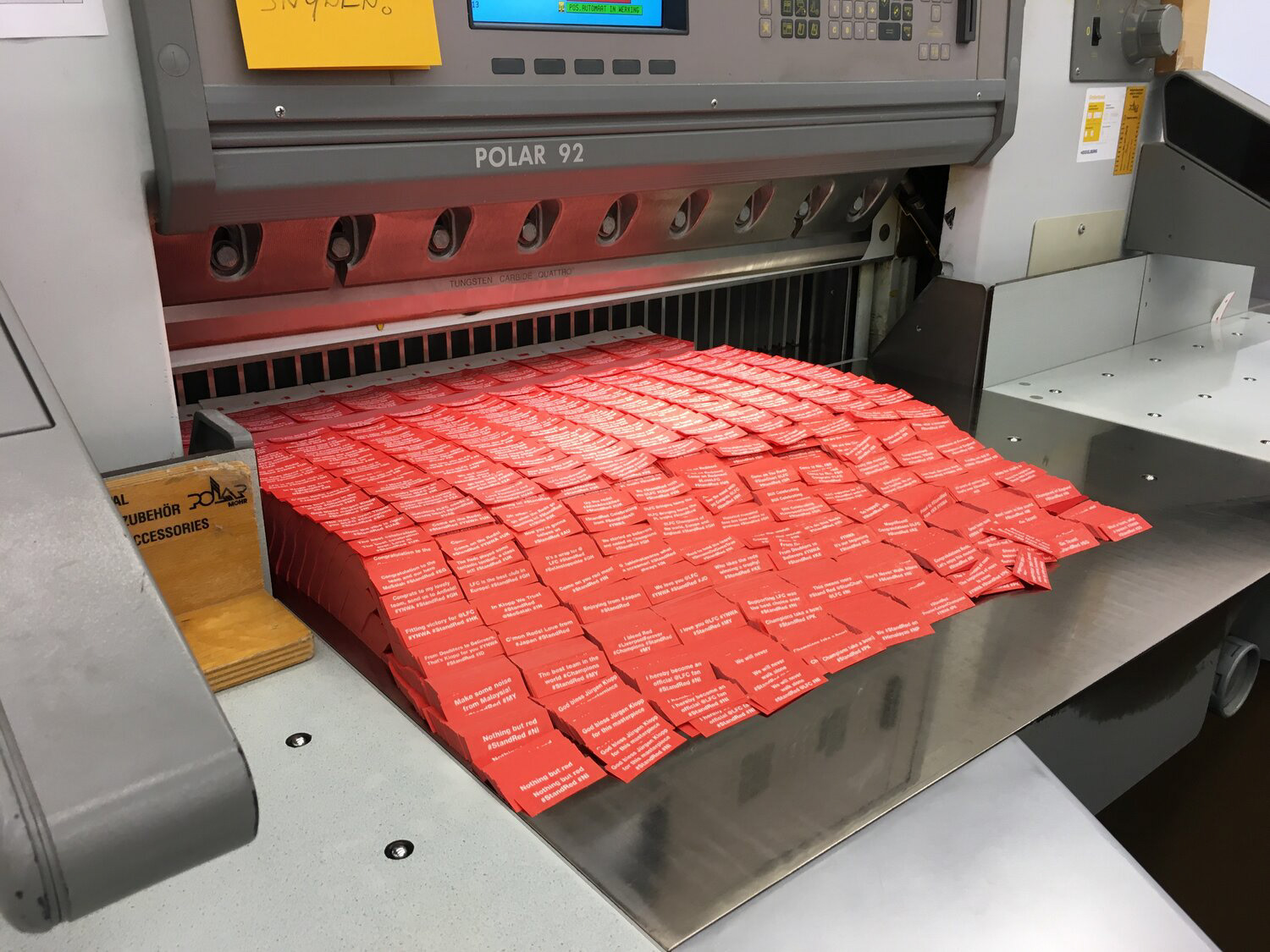 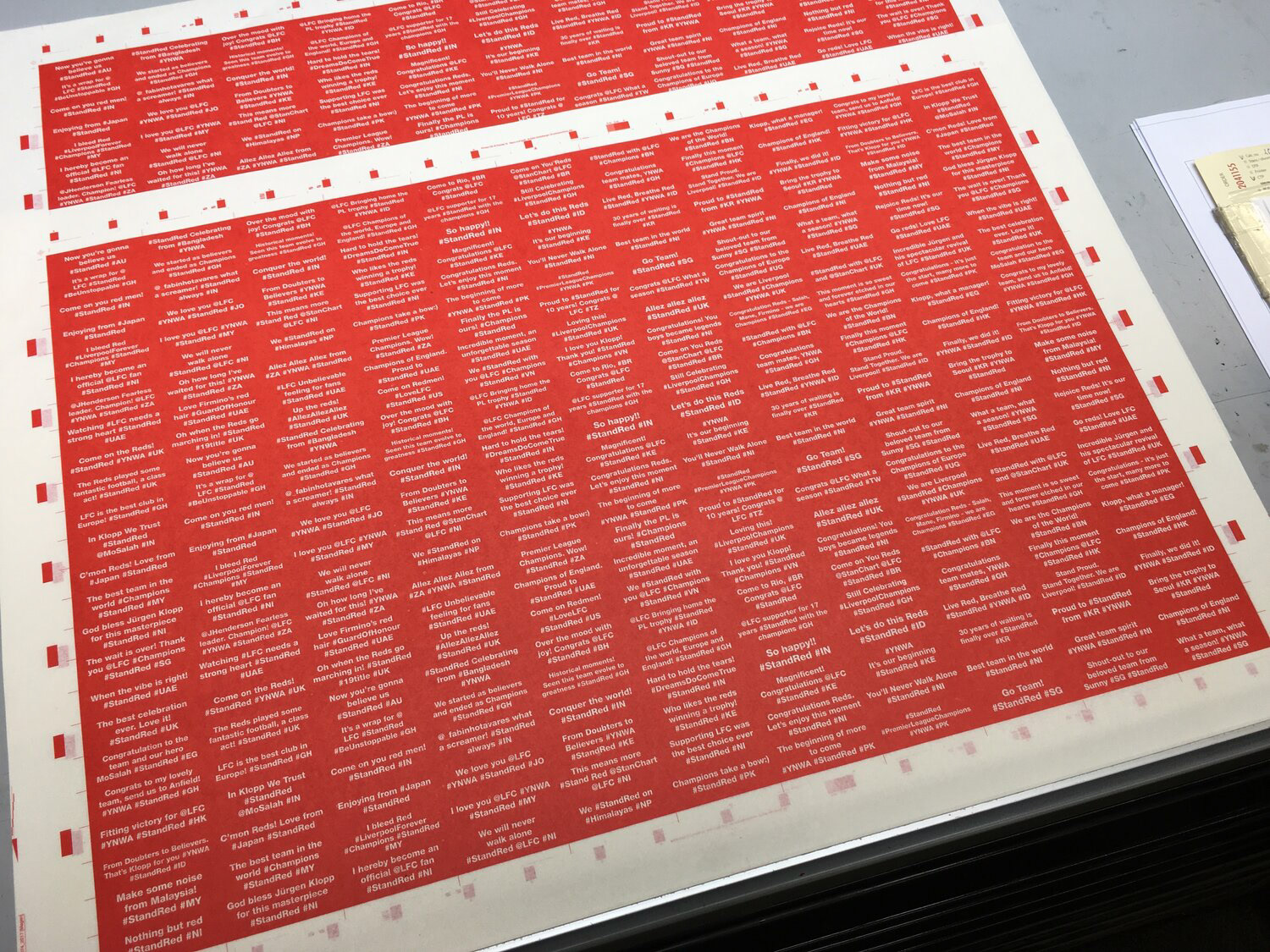 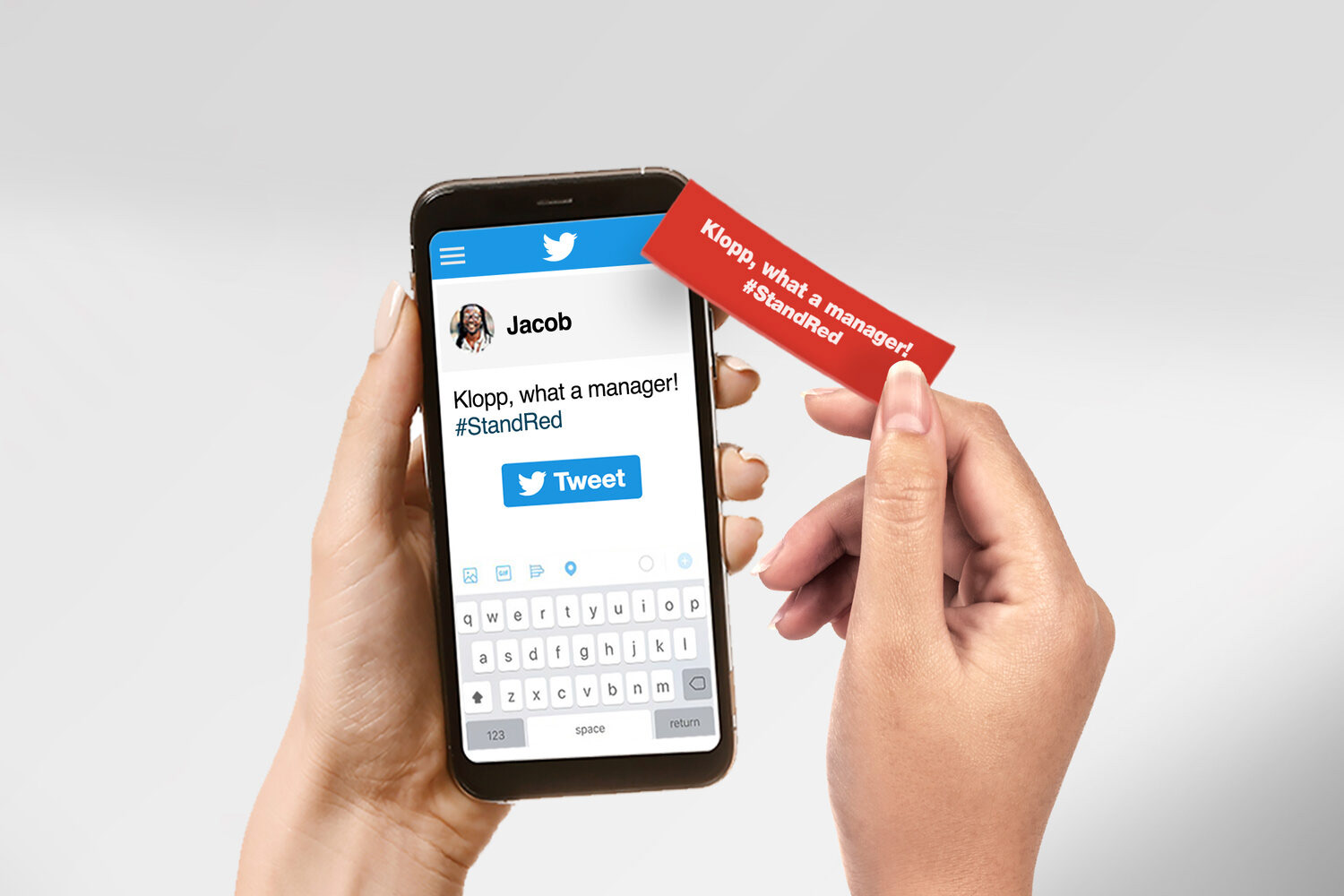